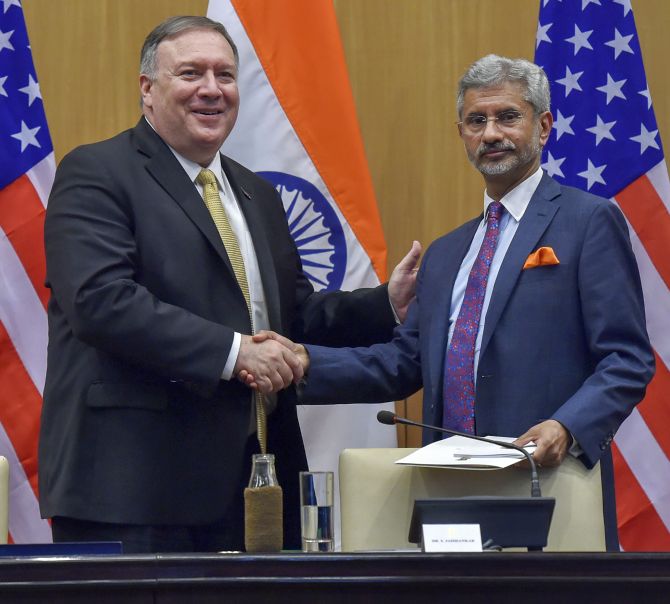 External Affairs Minister S Jaishankar on Saturday met United States Secretary of State Mike Pompeo on the sidelines of the Munich Security Conference and discussed bilateral relationship ahead of President Donald Trump's visit to India this month.
'Good to see @SecPompeo at #MSC2020. Allowed us to take stock of the relationship as we look forward to @realDonaldTrump 's visit,' Jaishankar tweeted.
President Trump and First Lady Melania Trump will pay a state visit to India on February 24 and 25 at the invitation of Prime Minister Narendra Modi, it was announced this week.
In addition to New Delhi, Trump will also visit Ahmedabad to address a joint public meeting with Modi at a newly-built stadium.
Jaishankar, who arrived here on Friday for the prestigious security conference, also met House Speaker Nancy Pelosi and said her 'consistent support' to India-US ties has always been a great source of strength.
Jaishankar on Friday met US ambassador to the United Nations Kelly Knight Craft on the sidelines of the conference.
Trump on his maiden trip to India will also meet the country's top business leaders in New Delhi on February 25, in a bid to push for deeper trade and business relations between the two nations.
On the sidelines of the security conference, Jaishankar met several other world leaders attending the meet.
The Munich Security Conference, being held here from February 14-16, is the world's leading forum for debate on international security policy. -- PTI
« Back to LIVE