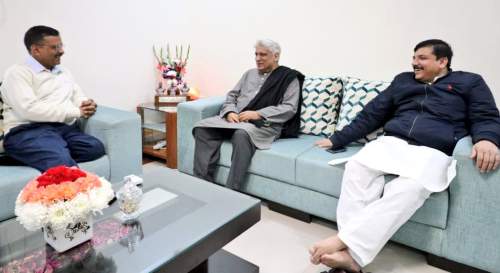 Veteran writer-lyricist Javed Akhtar met AAP convenor Arvind Kejriwal at his residence on Friday and congratulated him for his win in the Delhi Assembly polls.
"It was a pleasure receiving Javed Akhtar sahab today at my residence," Kejriwal said in a tweet. Party functionaries said Akhtar met Kejriwal to congratulate him for his victory in the Delhi assembly polls.
Earlier, Akhtar also met AAP leader Sanjay Singh at his residence. The AAP won 62 seats in the 70-member Delhi Assembly, while the Bharatiya Janata Party (BJP) bagged the remaining eight seats. The Congress drew a blank for the second consecutive time. -- PTI
« Back to LIVE