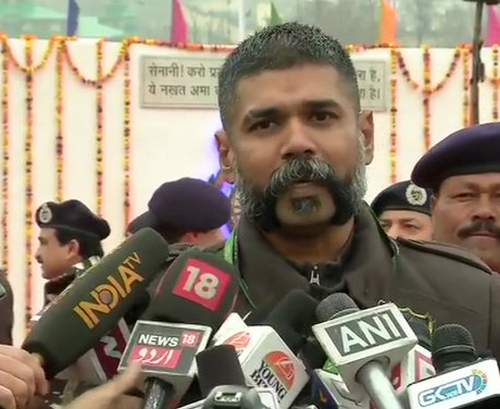 On the 1st anniversary of the deadly terror strike against a convoy of CRPF jawans in Pulwama, J-K, a thoughtful gesture by Umesh Gopinath Jadhav from Maharashtra.
Jadhav, who is the special guest at the wreath-laying ceremony at the CRPF campus in Kashmir's Lethpora said he took a 61000 km long journey across India to meet families of the 40 jawans who lost their lives in the attack.
"I'm proud that I met all the families of the Pulwama martyrs, and sought their blessings. Parents lost their son, wives lost their husbands, children lost their fathers, friends lost their friends.
"I collected soil from their houses and their cremation grounds."
The soil collected was placed at the memorial at CRPF's Lethpora camp.
On February 14 last year, a convoy of vehicles carrying security personnel on the Jammu-Srinagar National Highway was attacked by a vehicle-borne suicide bomber at Lethpora in Pulwama district of Jammu and Kashmir. Forty Central Reserve Police Force personnel were killed in the attack.
« Back to LIVE