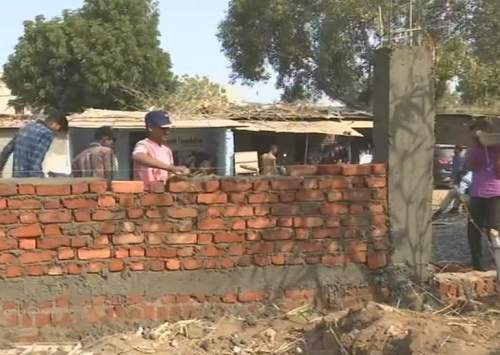 Ahead of US President Donald Trump's visit to India later this month, the Ahmedabad Municipal Corporation is building a wall in front of a slum along the road connecting Sardar Vallabhbhai Patel International Airport to Indira Bridge.
However, city mayor Bijal Patel denied having knowledge in this regard. "I have not seen it. I do not know anything about it," Patel said.
On Wednesday, a thorough security check was conducted at Sabarmati Ashram ahead of Trump's visit to Ahmedabad.
According to the Ministry of External Affairs, Trump is expected to attend an event at the Motera Stadium in Ahmedabad on the lines of the 'Howdy Modi' function that was addressed by the US President and Prime Minister Narendra Modi in Houston in September last year.
Trump is slated to pay a two-day visit to India on February 24-25. During the visit, Trump, who will be accompanied by First Lady Melania Trump, will attend official engagements in New Delhi and Ahmedabad, and interact with a wide cross-section of the Indian society, the MEA said in a statement.
« Back to LIVE