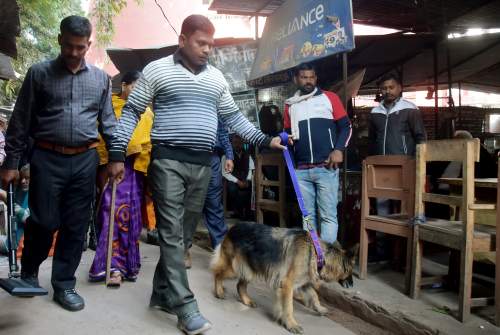 Update: A crude bomb reportedly went off in a Lucknow court compound on Thursday, "injuring" three lawyers in an incident which police said was triggered by rivalry between two groups.
Two live bombs were recovered, police said. But they added that nobody appeared to have seen or heard the blast, which a lawyer claimed took place outside his chambers. Police have launched an inquiry.
A large number of policemen and a bomb disposal squad were rushed to the site. Lucknow Bar Association joint secretary Sanjiv Kumar Lodhi claimed he was the target of the "attack' because he has been complaining about some judicial officers. He said about 10 people hurled crude bombs outside his chamber around 11.30 am.
"I and two other lawyers were injured," he told reporters. "One bomb exploded but two still lay unexploded," he said, adding that the attackers left brandishing firearms. Lodhi questioned the security on the premises of the collectorate, which houses the district courts. He demanded security for himself.
Joint Police Commissioner Naveen Arora said Lodhi has filed a complaint against the Bar Association's general secretary Jitu Yadav and three others, alleging that he was attacked with crude "sutli bombs'.
« Back to LIVE

Betaal does scare the wits out of you in certain sequences but as a whole, fails to make a mark, sighs Moumita Bhattacharjee.