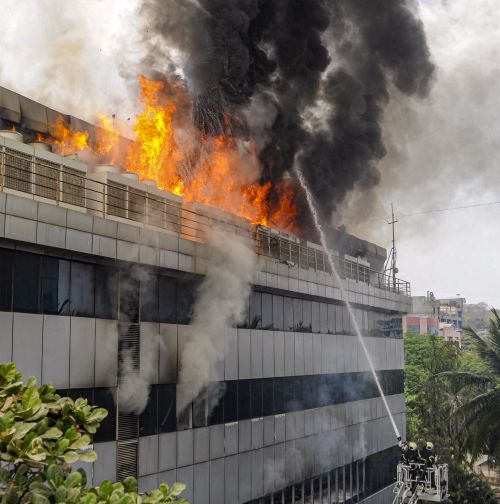 Firefighters battled to contain a major blaze that started in one of the floors of a three-storey commercial building on Thursday and later spread to other parts of the structure in suburban Andheri, but no casualty has been reported so far, a civic official said.
The fire broke out in the ground-plus-three storey building located in Rolta Technology Park in the Marol area around 11.30 am and was yet to be brought under contral, he said.
Around 4.30 pm, the Fire Brigade informed that the operation to douse flames was still going, but so far there was no report of any casualty or anyone being trapped in the premises.
At least 12 fire engines and 11 jumbo water tankers are engaged in extinguishing the inferno, the official said.
According to civic sources, initially the fire was confined to the server room of the building, but later it spread to other parts of the strucuture, gutting a major portion of it.
As a major part of the building was engulfed by flames, the Fire Brigade escalated the fire call to "level four" (serious) around 1.50 pm, they said.
Mumbai's Chief Fire Officer Prabhat Rahangdale said dense smoke engulfed the building and its staircases, posing difficulties in the fire-fighting operation.
"The situation is deteriorating as there is no ventilation in the building. Firemen are facing difficulty in the operation due to intense heat and dense smoke inside the building, he said.
The situation is grave because of aluminium cladding, glass facade and lack of ventilation in the building, the Fire Brigade said.
"The firemen are battling to contain the blaze from inside as well as outside using special equipment and donning breathing apparatus sets, Rahangdale said.
The cause of the fire was not yet known, the sources said. -- PTI
Image: Firefighters try to douse a fire which broke out in a commercial building at Rolta Technology Park at MIDC, Andheri in Mumbai. Photograph: PTI Photo
« Back to LIVE