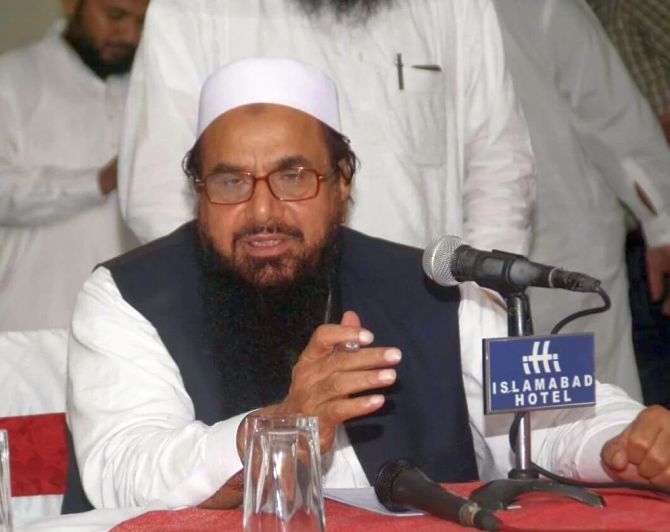 The efficacy of Pakistan's decision to convict Mumbai attack mastermind Hafiz Saeed in terror financing cases "remains to be seen" and whether the country would take action against all other terrorist entities and individuals operating from its soil, government sources said on Thursday.
Saeed was sentenced to 11 years in prison by an Anti-Terrorism Court in Lahore on Wednesday - a development that came "on the eve of the (Financial Action Task Force) Plenary meeting", sources said.
"We have seen media reports that a court in Pakistan has sentenced UN-designated and internationally proscribed terrorist Hafiz Saeed in terror financing cases. It is part of a long-pending international obligation of Pakistan to put an end to support for terrorism," they noted.
"The decision has been made on the eve of the FATF plenary meeting, which has to be noted. Hence, the efficacy of this decision remains to be seen. It has to also be seen whether Pakistan would take action against other all terrorist entities and individuals operating from territories under its control, and bring perpetrators of cross border terrorist attacks, including in Mumbai and Pathankot to justice expeditiously," sources said.
Saeed's conviction comes days ahead of the Plenary and Working Group meetings of the FATF - a Paris-based global watchdog which, last year, had warned Pakistan to deliver on its commitments to curb terror financing and money laundering.
The Jamaat-ud Dawa chief and three of his associates -- Hafiz Abdul Salam bin Mohammad, Mohammad Ashraf and Professor Zafar Iqbal -- had been indicted by the ATC on terror financing charges on December 11 last year in a case filed by the Counter-Terrorism Department.
-- ANI
« Back to LIVE