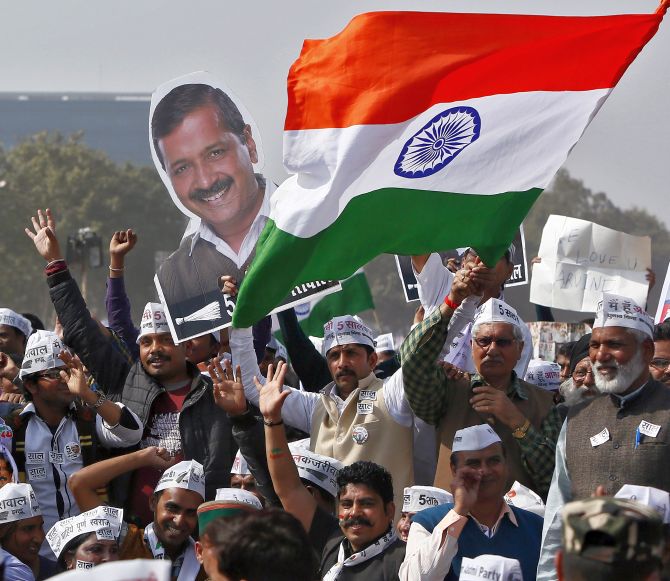 Two days after the Delhi assembly election results, Aam Aadmi Party national convener Arvind Kejriwal held a meeting with senior leaders to review the party's defeat in eight seats.
The reasons behind the defeat in each seat were discussed in detail during the meeting, a statement issued by the party said.
Inputs on the reasons for the loss in these seats were also taken from the respective candidates, it added.
The Aam Aadmi Party won 62 seats in the 70-member Delhi Assembly, while the BJP bagged the remaining eight seats.
The Congress drew a blank for the second consecutive time in the Delhi polls.
Results for the assembly polls were declared on February 11.
"The AAP national convener, Arvind Kejriwal, instructed all the leaders to keep in touch with the public even in the seats where the party has lost," the statement said.
Kejriwal told them to understand the problems that people face and resolve them promptly. He suggested to establish a close relationship with the public, to which all the leaders agreed, it said.
The AAP leaders during the meeting expressed surprise on why the Aam Aadmi Party lost eight seats even after so much work by the government, the statement said.
"Also, the seats where the margin of defeat was narrow got a special mention. Among which Laxmi Nagar was the most prominent where the party lost by just 800 votes," it said.
« Back to LIVE