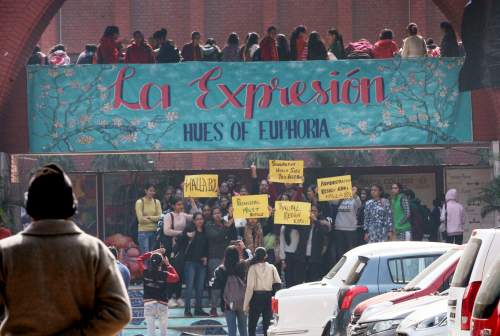 A Delhi Court on Thursday sent all accused arrested, in connection with the alleged molestation of students during a cultural festival at the all-women Gargi College in Delhi, to judicial custody for 14 days.
Ten people have been arrested by the Delhi police in connection with the recent incident at Delhi University's all-women Gargi College, where students were allegedly molested and sexually assaulted during a cultural festival last week after outsiders barged into the college.
All the accused were produced at Saket district court where the concerned magistrate decided to send all the accused to Tihar Jail under judicial custody for 14 days.
The case was registered at Hauz Khas Police Station and several teams were constituted to investigate the case. They have been looking into technical details available and visited various sites in NCR for identification of suspects.-- ANI
« Back to LIVE