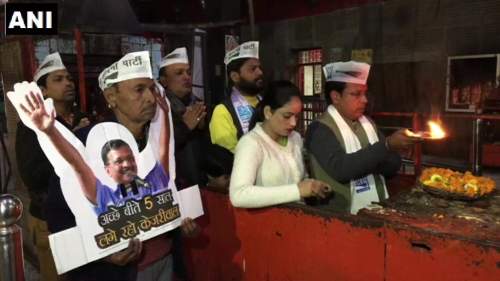 Good morning and welcome to the counting of votes for the Delhi assembly elections.
The counting of votes for 70 seats of the Delhi Assembly will begin amid tight security today at 8 am.
According to Delhi's Chief Electoral Officer (CEO) Ranbir Singh, the counting of votes will take place at 21 centres. There will be a dedicated hall for every assembly constituency.
A tight security net has been put in place to ensure the counting of votes takes place in a peaceful manner. Over 670 candidates are in the fray for 70 seats at stake in the country's capital.
As much as 62.59 per cent voter turnout was recorded in Delhi on February 8, when the elections were held in a single-phase in Delhi.
Most of the exit polls predicted that Arvind Kejriwal-led AAP will retain the power, winning two-thirds seats while some have even predicted three-fourth majority in the 70-member assembly.
The high octane campaign had seen the heavyweights of different parties leaving nothing unturned to influence the voters. Prime Minister Narendra Modi, Home Minister Amit Shah and other Union Ministers and Chief Ministers sought votes for the BJP, which has been out of power in Delhi for over 20 years now.
The ruling party -- AAP -- was mainly dependent on Chief Minister Arvind Kejriwal and Deputy Chief Minister Manish Sisodia.
The Congress party had pressed its several leaders including Rahul Gandhi and Priyanka Gandhi Vadra into campaigning.
Image: AAP workers perform a puja ahead of the counting of votes for the Delhi elections. Pic: ANI
« Back to LIVE