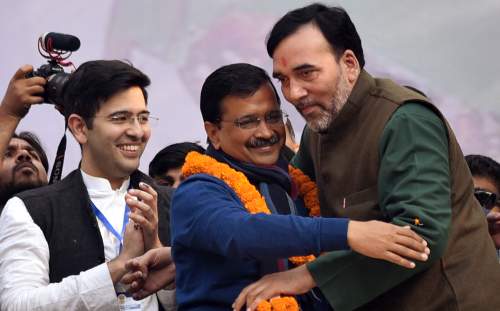 Congress leader and Punjab cabinet minister Sadhu Singh Dharamsot on Tuesday said his party was not defeated in the Delhi election as its tally remained at zero like in 2015, and so it was the BJP's loss.
"We were zero earlier, and this time too we are zero. So it's not our defeat. It's a defeat for the BJP," he told mediapersons here, referring to the election trends which gave the Congress no seat in the Delhi assembly election.
The Congress had not won even a single seat in the 2015 Assembly polls too. Meanwhile, Leader of Opposition in Punjab Assembly Harpal Singh Cheema hailed the AAP's performance in the Delhi Assembly election as a "victory of agenda of development over that of hatred and dirty politics".
The Aam Aadmi Party is the second largest party in Punjab with 19 MLAs in the 117-member House. "Congratulations to all the volunteers, n (and) people of Delhi for this massive mandate in favour of @AamAadmiParty. This is the victory of the agenda of development over hatred and Dirty politics," Cheema tweeted in English.  -- PTI
Image: Aam Aadmi Party leader Gopal Rai hugs Delhi Chief Minister Arvind Kejriwal as party leader Raghav Chadha looks on.
« Back to LIVE