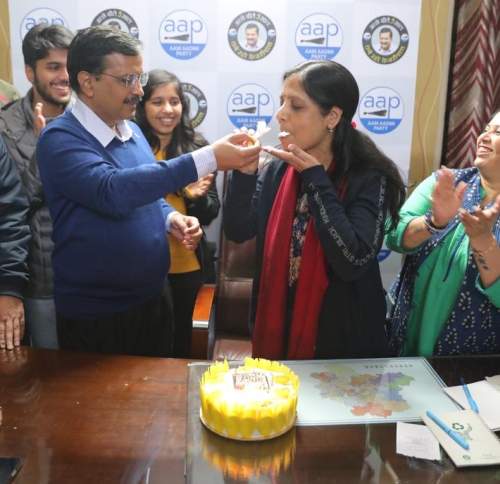 The Aam Aadmi Party (AAP) has crossed the 60 mark, while the BJP is on 10, as per the trends for all 70 seats in the Delhi Assembly elections by the Election Commission of India.
According to the data compiled by the ECI, Congress is yet to register its lead on any seat, while AAP has also has been able to maintain a sizeable lead of over 14 per cent in vote share over BJP.
Prominent among those who are leading in their respective constituencies include Chief Minister Arvind Kejriwal, who has taken a lead of 14,227 votes over BJP's Sunil Kumar Yadav from New Delhi constituency.
AAP MLA Amanatullah Khan has also taken a sizeable lead of over 36,000 votes over Braham Singh of BJP from the Okhla Assembly seat.
However, Deputy CM Manish Sisodia is trailing behind BJP's Ravi Negi, by 1223 votes, after 10th round of counting, from the Patparganj Assembly constituency. The counting of votes for 70 seats of the Delhi Assembly began amid tight security at 8 am today. Delhi went to polls in a single-phase on February 8. -- ANI
Image: Cutting the cake and eating it too: Delhi CM Arvind Kejriwal celebrates his wife Sunita's birthday today.
« Back to LIVE