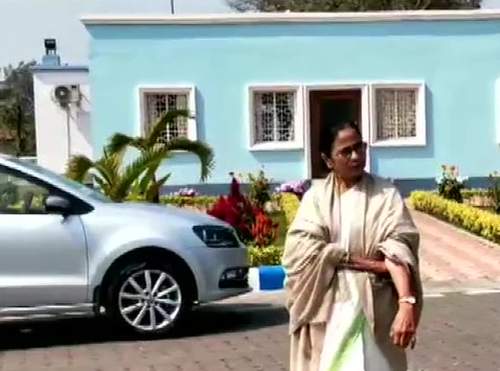 West Bengal Chief Minister Mamata Banerjee on Tuesday congratulated AAP chief Arvind Kejriwal, who appears set for a massive win as per official trends of the Delhi Assembly elections.
CM Banerjee also slammed the Bharatiya Janata Party (BJP) for not doing enough for development and accused the party of "political vendetta."
"I have congratulated Arvind Kekriwal. People at present want roti (food), kapda (clothes) and makan (house). The BJP lost in Maharashtra and Jharkhand. The trend is very clear. They are doing vendetta politics.
"BJP says garbage of lies. They use the money to spread rumors and propaganda. At present, important issues are unemployment and the economy. I am also sure that the Citizenship (Amendment) Act will be rejected by people. These things do not work in elections. After Delhi poll results, I hope that the Centre will withdraw the Citizenship (Amendment) Act and National Register of Citizens and focus on the economy."
As per the recent trends by Election Commission at 1.20 pm, the AAP is leading on 57 seats and BJP is far behind at 13.The counting of votes for 70 seats of the Delhi Assembly began amid tight security at 8 am today. Delhi went to polls in a single-phase on February 8. -- ANI
« Back to LIVE