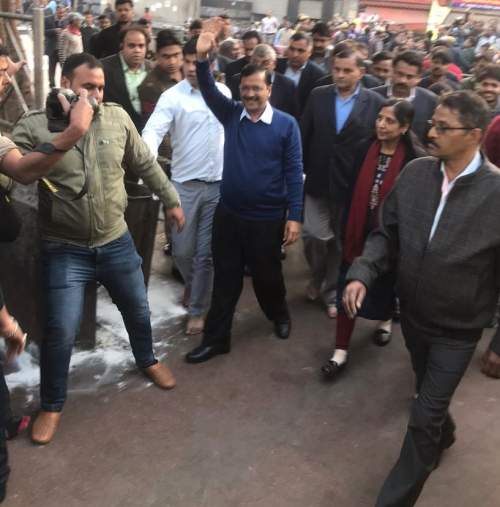 Aam Aadmi Party chief Arvind Kejriwal visited a Hanuman temple in Delhi's  Connaught Place to offer prayers after the party's resounding victory in the assembly elections. Kejriwal won the New Delhi seat by over 21,000 votes against his nearest rival BJP's Sunil Kumar Yadav. Kejriwal also invoked Hanuman when he addressed his followers this afternoon when leads showed AAP was headed to a win.
A beaming Kejriwal began his speech with "Bharat Mata Ki Jai", "Inquilab Zindabad" and "Vande Mataram" and said, "This is the day of Lord Hanuman who has blessed the people of Delhi. We pray that Hanumanji keeps showing the right path to us so that we continue to serve people for the next five years."
In fact, Hanuman has inadvertently romped through the Delhi election trail. A few days before the Delhi polls, Kejriwal, when asked if he is a "Hanuman bhakt", told a TV channel that he is and even went on to recite the Hanuman Chalisa in front of an audience that cheered him on.
After Kejriwal visited a Hanuman temple before casting his vote, Delhi BJP chief Manoj Tiwari attacked him for "touching the idol without washing his hands". Following the attack, Arvind Kejriwal alleged that the BJP has been mocking him ever since he recited the 'Hanuman Chalisa' on a TV channel.
« Back to LIVE