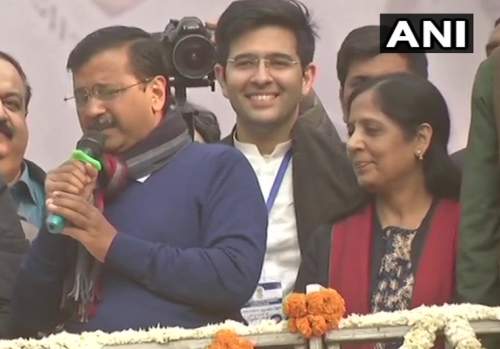 Delhi CM Arvind Kejriwal addresses his followers as the AAP heads to a resounding victory (63 seats) in the assembly polls.
Standing next to his beaming wife Sunita, who celebrates her birthday today, he told the cheering crowd, "I love you."
He said he prays that God blesses the party for the next five years as well. Raising a cry of 'Bharat mata ki jai', (borrowed from BJP rallies), Kejriwal said it was a new dawn in Delhi.
He said today was Tuesday and it Hanuman's day and the god has indeed blessed him. "Hanumanji ke aashirwad se hum jeet gaye hain," he said.
He said the mandate has given birth to a new kind of politics. He said the AAP win is a victory for entire India. "It is a victory of the people of Delhi who considered me their son," he said.
Kejriwal is headed to a temple visit next.
« Back to LIVE