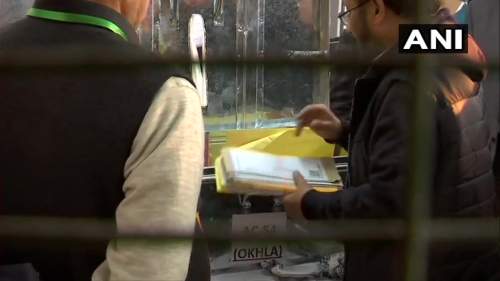 Aam Aadmi Party (AAP) Okhla candidate Amanatullah Khan and Jangpura candidate Praveen Kumar late night on Monday visited outside the designated strongroom to store EVMs at Meerabai Institute of Technology in Maharanibagh.
Earlier on Monday, Aam Aadmi Party's national convenor and Delhi Chief Minister Arvind Kejriwal had called a meeting at his residence over the security of EVMs after the elections were concluded.
The meeting was attended by Deputy Chief Minister Manish Sisodia, party's Delhi convenor Gopal Rai, senior leader Sanjay Singh and party strategist Prashant Kishor.
During this meeting, a detailed discussion was held over the measures to be taken to strengthen the security of EVMs stored in the strongrooms. All the leaders present in the meeting shared their views with the Chief Minister regarding the safety of EVMs and also gave him their suggestions following which it was decided to monitor the EVMs by AAP.Polling for Delhi Assembly seats was held on February 8. The counting of votes will take place today. -- ANI
Image: Counting of votes begins; visuals from a counting centre in Maharani Bagh.
« Back to LIVE