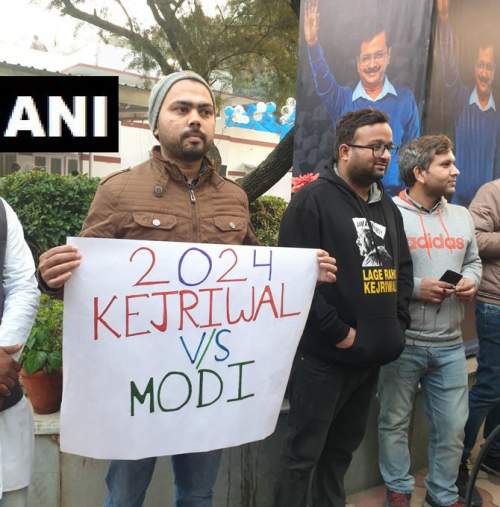 Senior Congress leader Sandeep Dixit on Monday said that his party will put up a poor show in the Delhi Assembly elections. The polling was held on February 8.
"I believe that Congress will perform very badly. I knew it from September itself," said Dixit while speaking to ANI.
Dixit blamed it on Delhi Congress leaders and in-charges for the same.
"The laxity shown by Delhi in-charges in the organisation...two-three people from Delhi Congress and AICC are directly responsible for ruining it," he said.
The Congress leader further claimed that Delhi Chief Minister and AAP leader Arvind Kejriwal too knew that his development plank was not working and hence he started promising freebies.
Image: An AAP supporter prophesies the Lok Sabha polls
Dixit lamented how "big Delhi Congress leaders and AICC in charges insulted" his mother and late Delhi Chief Minister Sheila Dixit saying: "All these big leaders of Delhi Congress who are sitting on top posts and AICC in charges, the way these people insulted Sheilaji, no one else did it," he said.
He stressed that result will be along the lines of what has been shown in the Exit Polls."No one else is to blame. It is a different thing that after losing tomorrow, different stories will be told and everything will be covered up. As far as I am concerned, what we are seeing in exit polls, the results too will be same," he added. -- ANI
« Back to LIVE