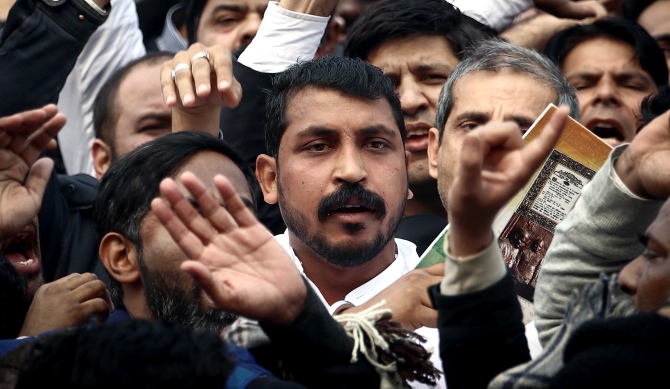 Bhim Army chief Chandra Shekhar Aazad on Tuesday approached the Supreme Court seeking review of its recent verdict on reservation in jobs for the Scheduled Castes and Scheduled Tribes.
The apex court on February 7 had delivered its verdict while dealing with the pleas regarding the Uttarakhand government's September 5, 2012 decision to fill up all posts in public services in the state without providing reservations to the SCs and the STs.
The government's decision was challenged in the Uttarakhand high court, which struck it down.
In his plea, Aazad and co-petitioner Bahadur Abbas Naqvi, have claimed that the top court's verdict has given a 'free hand' to the states to completely abolish reservations to the SCs, STs, Other Backward Castes and economically weaker sections of society.
The plea seeking review of the verdict said the apex court's ruling that state government is not required to collect data on inadequate representation if it has decided not to provide reservation 'will not only lead to further inequality but is also unconstitutional'.
'The impugned judgment is not only sweeping in its scope, but has intermingled various propositions and laid down principles that are erroneous on the face of the record and severely detrimental to the interests of the SCs/STs,' the plea said.
The petitioners claimed that the judgment will act as a 'tool to exploit SCs, STs, OBCs and the economically weaker sections, causing further marginalisation within the society' and is against the Constitution which safeguards interests of these communities.
'The impugned judgment is against Article 46 of the Constitution which provide for promotion of the interests of SCs, STs and other weaker sections of the society,' it said, adding that 'the question in the impugned judgment could only have been considered after being referred to a larger bench if this court was of the view that the judgments of the Constitution Bench required reconsideration'.
While upholding the Uttarakhand dispensation's September 2012 notification, the apex court had said in its verdict that since the government was not bound to provide reservation in promotions, the high court should not have declared the state's decision as illegal.
Referring to constitutional provision about reservation, the apex court had said, "It is for the state government to decide whether reservations are required in the matter of appointment and promotions to public posts."
"In view of the law laid down by this court, there is no doubt that the state government is not bound to make reservations. There is no fundamental right which inheres in an individual to claim reservation in promotions," the court had said, adding, "No mandamus can be issued by the court directing the state government to provide reservations."   -- PTI
« Back to LIVE