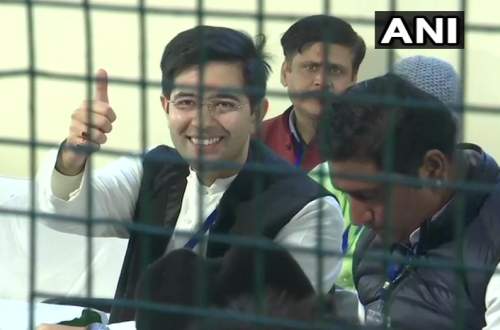 Aam Aadmi Party candidate from Rajinder Nagar Raghav Chadha at a counting center in Gole Market. He has been leading from the seat.
Chadha has been getting a lot of attention in the run up to the polls not just because he's all of 31 years old, but because of the many marriage proposals he has received.
The 31-year-old chartered accountant has received at least 12 marriage proposals on social media, according to his social media team. "Recently, a woman tagged him on Twitter, asking him to marry her. Chadha said the economy was not doing good so it was not the right time to get married," his social media manager said.
« Back to LIVE

China on Thursday said Chinese and Indian troops have taken "effective measures" to disengage at the Galwan Valley and other areas along the Line of Actual Control in eastern Ladakh and the situation is "stable and improving," days after...

Amazon's action follows that of other retailers such as Walmart Inc, Target Corp and Nike Inc.

The GoM was told that six states -- Maharashtra, Delhi, Gujarat, Tamil Nadu, Uttar Pradesh and West Bengal -- account for 86 per cent of the deaths caused by COVID-19 and 32 districts account for 80 per cent of such fatalities, the Union...