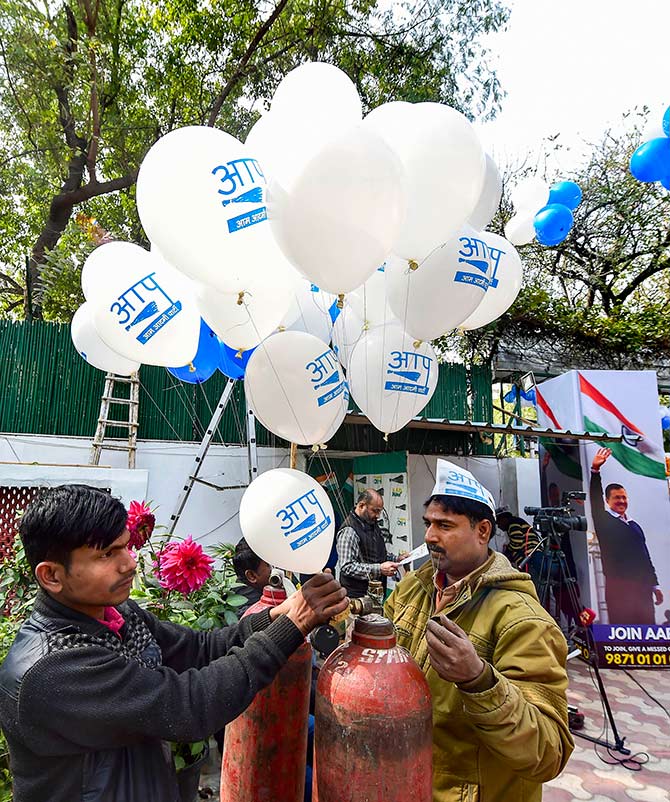 Riding on its development agenda, the Arvind Kejriwal-led Aam Aadmi Party was on Tuesday set for a resounding victory in the Delhi assembly elections to retain power for a third term. As votes for the February 8 elections were counted, the AAP was leading in 58 of 70 seats and the BJP in 12, leaving the Congress virtually decimated in a city it had ruled for three consecutive terms under Sheila Dikshit, according to Election Commission figures.
The elections in the national capital took place in the midst of massive protests in the city and elsewhere over the new citizenship law, the National Register of Citizens and the National Population Register.
The BJP faced charges of carrying out a "divisive" campaign to polarise the voters by consistently highlighting the over 50-day demonstration by a group of women in Shaheen Bagh area.
Though BJP's campaign focused on national security issues, the AAP mainly focused on its achievements in the fields of education, healthcare and infrastructure.
The AAP had registered a sensational victory in 2015 by winning 67 seats in a hurricane march that almost wiped out the BJP and the Congress. According to latest trends, Kejriwal, a former Indian Revenue Service officer, was leading in his New Delhi constituency by over 6,300 votes, while his deputy Manish Sisodia was 754 votes behind BJP's Ravinder Singh Negi in Patparganj. Transport Minister Kailash Gahlot was leading by 1,115 votes from Najafgarh constituency. Health Minister Satyendar Jain was leading by 309 votes in Shakur Basti constituency and BJP's S C Vats was second. Labour Minister Gopal Rai was leading in Babarpur and Food and Civil Supplies Minister Imran Hussain in Ballimaran. Kejriwal is expected to address party workers and the media later in the day.
AAP's Preeti Tomar won the Tri Nagar seat by 12,000 votes, while Bandana Kumari emerged victorious on the Shalimar Bagh seat by a margin of 800 votes, the officials said.
« Back to LIVE

Summary of all that made news on Monday