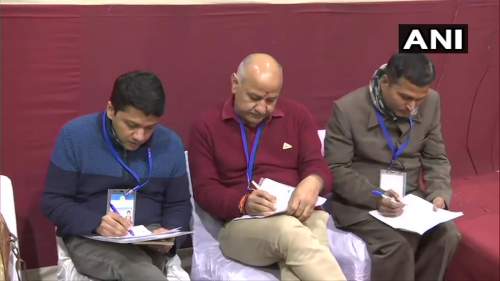 Leads so far: AAP: 53, BJP: 16, CONG: 1
The counting began at 8 am and will be held in multiple rounds, Delhi Chief Electoral Officer (CEO) Ranbir Singh said. "Elaborate security arrangements have been put in place. The exercise is being carried out as per the laid-down procedures of the Election Commission," Singh said.
Tight security arrangements have been put in place at various centres across Delhi, he said.
"The postal ballots will be counted first till around 8.30 am and then the votes cast through electronic voting machines will be counted," the senior official said.
"The counting centres are spread across 21 locations, spanning the 70 constituencies. Each centre has several counting halls, equal to the number of constituencies falling in that district," he said.
Each EVM consists of a ballot unit (BU), a controls units (CU) and a voter-verifiable paper audit trail (VVPAT.) After counting of votes through CUs from every assembly constituency, five VVPATs will be randomly selected and they will be counted, the official said.
The counting centres are located across 11 districts, including at CWG Sports Complex in east Delhi, NSIT Dwarka in west Delhi, Meerabai Institute of Technology and G B Pant Institute of Technology in southeast Delhi, Sir CV Raman ITI, Dheerpur in central Delhi, and Rajiv Gandhi Stadium in Bawana in north Delhi.
Image: Making it count: Delhi Deputy CM and Aam Aadmi Party candidate from Patparganj assembly constituency Manish Sisodia and Bharatiya Janata Party candidate Ravi Negi at the Akshardham counting centre.
« Back to LIVE