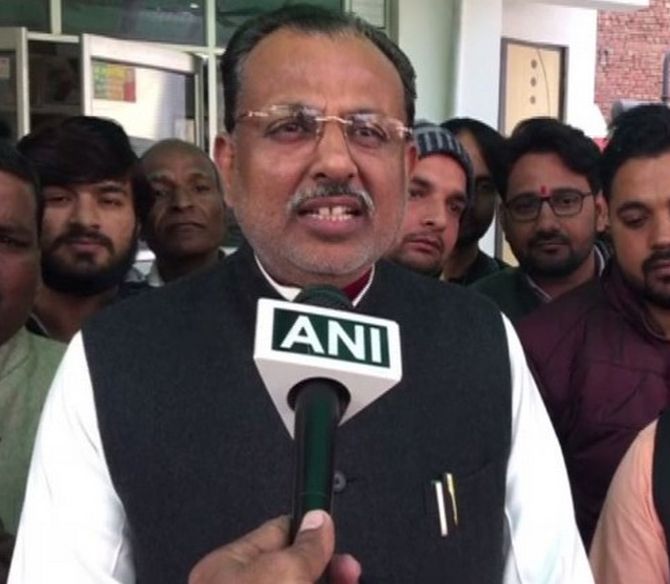 The Bharatiya Janata Party slapped an Uttar Pradesh leader with a notice after he demanded a ban on burqa, calling it a security threat and linking it to demon king Ravana's sister Surpanakha.
"Burqa should be banned in the country as has been done in several other countries," Raghuraj Singh, who holds a rank equivalent to a minister of state in the Uttar Pradesh government, told reporters on Monday.
Hours later, BJP's state unit president Swatantra Dev Singh issued a show cause notice asking him to explain within a week why he should not be expelled from the party over the 'undignified comments'.
Raghuraj Singh claimed burqa is not worn in countries like Sri Lanka, China, the United States and Canada and said it should be banned in India as terrorists can take advantage of it.
The BJP leader said people are sporting burqas in Delhi's Shaheen Bagh protest against the new citizenship law, and added, "The burqa helps terrorists, thieves and anti-socials elements to hide behind it."
"Burqa is a threat to national security and has to be banned to crush terrorism," Singh said.
Without citing any source, Singh linked burqa to Surpanakha, the demon who has her face disfigured in Ramayana.
According to Singh's version, Surpanakha fled to hide in the Arab desert.
"As her nose and ears were chopped, she used a burqa to hide her face," he said, adding it is not necessary for humans.
"In Mecca, a shivalinga was set up by Guru Shukracharya, who was the guru of devils, and from there the burqa tradition started," he said.
"This is Hindustan and it will be run as per traditions of the Hindus. This is our wish," he said.
Congress leader P L Punia and Aam Aadmi Party's Sanjay Singh condemned Raghuraj Singh's remarks.
BJP leader Siddharth Nath Singh, a minister in the UP government, disowned the remarks, saying they reflected Raghuraj Singh's personal opinion.
Later, party spokesperson Manish Dixit in Lucknow said Raghuraj Singh has been put on notice.
"The notice has been served on charges of working against the policy of the party and making undignified comments," he said.
The state unit president has said the party will not tolerate any undignified behaviour or comment against women belonging to any caste or community, according to the spokesperson.
Raghuraj Singh, who is part of a cell attached to UP government's labour department, courted controversy earlier by threatening to bury alive Aligarh Muslim University students for raising slogans against Uttar Pradesh Chief Minister Yogi Adityanath.
Bharatiya Janata Party's Aligarh unit spokesperson said Singh holds the rank equivalent to a minister of state in the UP government.  -- PTI
« Back to LIVE