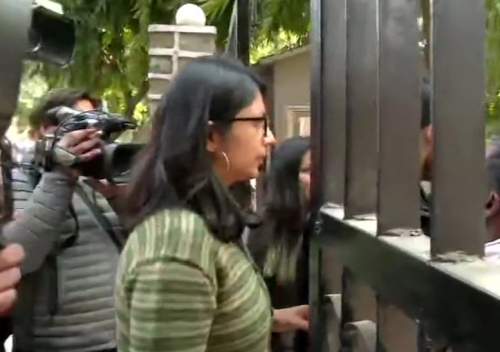 HRD Minister Ramesh Pokhriyal 'Nishank' on Monday said outsiders were behind the alleged molestation of students at an all-women college in Delhi and the administration of the institute has been told to take action.
Replying to a question of Congress MP Gaurav Gogoi in Lok Sabha, Pokhriyal said the government was aware of the incident at Gargi College, a reputed institute in the national capital.
"Those who were involved in the incident were outsiders and not students. It was not a good incident. The college administration has been told to take action in the incident," he said during Question Hour.
Gogoi said sexual harassment and bullying often takes place in many higher education institutions and action should be taken in such incidents. He also said a group of men allegedly molested the students after gatecrashing Gargi College during a festival.
Reports said the incident came to light when some of the students took to Instagram to narrate their unpleasant experiences during the fest at the college on February 6 and alleged that security personnel did nothing to control the unruly groups. -- PTI
Image: Delhi Commission For Women Chief Swati Maliwal arrives at Gargi College. Students of Gargi College have alleged sexual assault by outsiders.
« Back to LIVE