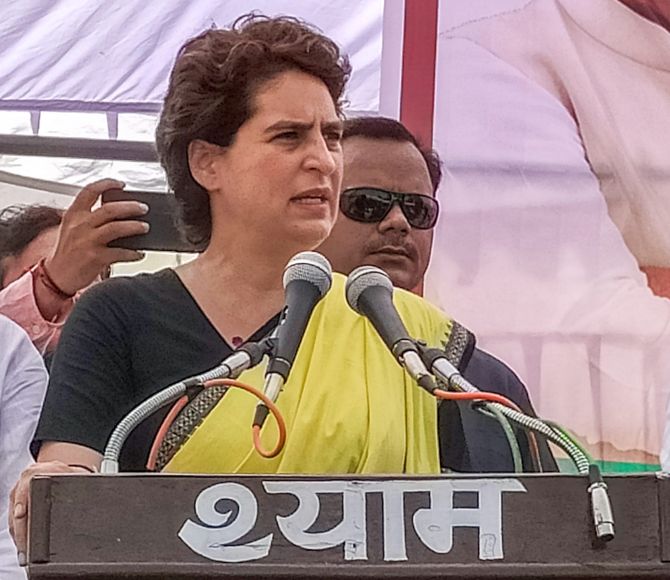 Congress leader Priyanka Gandhi Vadra on Monday said it is "pretty clear" the government has no basis to charge Omar Abdullah and Mehbooba Mufti under the Public Safety Act and the two former Jammu and Kashmir chief ministers must be freed. "Since when has becoming a "daddy's girl" and encouraging people to vote become a crime against the nation," Priyanka Gandhi asked on Twitter.
Her attack came after Abdullah's "considerable influence" over people, including the ability to attract voters to polling booths despite poll boycott calls and the potential for channelling energies of public for any cause, was cited in support of his detention under the stringent PSA.
His political opponent and Peoples Democratic Party leader Mehbooba Mufti has been accused of making anti-national statements and extending support to organisations such as the Jamaat-e-Islamia.
She was also reportedly referred in the report as being called by the masses as 'Daddy's girl' and 'Kota Rani'. "Since when has being a 'Daddy's girl' and encouraging people to vote become a crime against the nation? I would be proud to be both!" Priyanka Gandhi said in a tweet.
"It's pretty clear that the government has no basis for charging Omar Abdullah and Mehbooba Mufti with PSA. They must be freed," she said. Congress chief spokesperson Randeep Surjewala also attacked the government over the PSA dossier on the two leaders.
"It has now become a crime to encourage people to vote despite a call for boycott by separatists, and that too under PSA?" Surjewala asked in a tweet.
All leaders, parties and election commissioners have been committing this crime, he said. "Where are the Supreme Court and Election Commission? 'Modi hai toh mumkin hai (If Modi is there, it is possible)," Surjewala said, taking a dig at the BJP's 2019 election campaign. -- PTI
« Back to LIVE