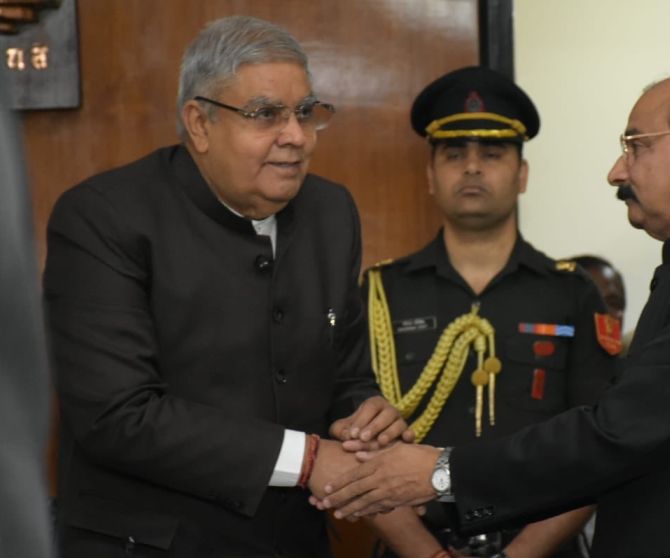 Expressing surprise that West Bengal Finance Minister Amit Mitra's budget speech was telecast live but the state governor's address on the inaugural day of the session was not, Jagdeep Dhankhar on Monday wondered whether it was some kind of 'censorship'.
He termed this as 'intolerance' to the constitutional head of the state, and expressed confidence that the media will not be a 'silent spectator' to the whole episode.
Mitra presented the Budget of the Mamata Banerjee government on Monday, while Dhankhar addressed the Assembly at the beginning of the session on Friday.
'State Finance Minister Dr Mitra's budget speech was live while the address of the Governor under Article 176, an important occasion, in sharp deviation to practice was not allowed live coverage and media was also kept away. Leave to judgment of the people of the State!' Dhankhar said on his twitter handle.
He said this is of critical consequence for media.
'Is this acceptable expression of ideas? Is it not intolerance of (sic) the constitutional head ? Is it not a kind of censorship? I am sure the media and public would not be just silent spectators,' he said in the micro-blogging site.
The governor averted a showdown by not deviating from the speech prepared by the Trinamool Congress government for his customary address to the Assembly at the beginning of the budget session on Friday.
Dhankhar had earlier said that as the constitutional head of the state, he was within his right to make suggestions and hoped those would be incorporated in his speech.  -- PTI
« Back to LIVE