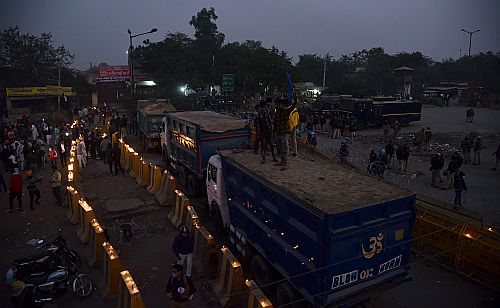 Asserting that the Opposition was able to mislead some farmers, Union Minister of State for Social Justice and Empowerment Krishan Pal Gurjar on Tuesday said that those protesting against the new farm laws should recognise the lies fed to them.
"I have contacts with people from almost every state because of my work. I have come to know that the farmer brothers from every corner of the country are satisfied with the new agricultural laws. But the Opposition that wants to hurt the country has succeeded in confusing and misleading some of our brothers," Gurjar said in a tweet roughly translated from Hindi.
He requested them to recognise the lies of the Opposition. "Look at the steps taken by the (Narendra) Modi government so far for the empowerment of farmers; these are the most effective and quickly taken steps by any government in history. I am sharing some more information with you."
The minister listed what he terms as lies and truth regarding the agricultural laws.
"The lie is that farmers' land will be given to capitalists. The truth is it is clearly directed in one of the Acts that sale, lease and mortgage of farmers' land is prohibited. There will be contracts on crop not on land. The lie is profit for big corporates and loss to farmers. The truth is in many states, the farmers are producing sugarcane, cotton, tea and coffee for corporates. The small farmers will gain from this. They will get a guaranteed profit, along with technology and machinery," he said. -- ANI
« Back to LIVE

Adani group firms Ambuja Cement Ltd and ACC Ltd on Thursday said no shares of the companies have been pledged by the promoters, who have only provided a "non-disposal undertaking". In a joint statement to stock exchanges, Ambuja Cement...