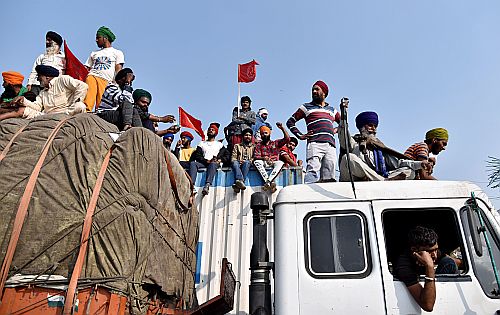 Farmers have said they will attend the talks initiated by the government today. "The government has invited us without preconditions and we're going for the talks. About 35 representatives will go, and we will demand the laws be repealed. We will also demand law on MSP. If the government doesn't agree, the protests will continue," Jagjit Singh Dallewal of the Bharatiya Kisan Union said after the meeting.
Earlier, one of the 32 farmer unions invited for talks backed out and demanded all 500 organisations that are part of protests be invited.
Agriculture Minister Narendra Singh Tomar on Monday had invited leaders of farmer unions for talks on Tuesday, instead of December 3, citing the COVID-19 pandemic and cold.
Thousands of farmers stayed put at various Delhi border points for the sixth consecutive day on Tuesday protesting against the new farm laws, which they fear will dismantle the minimum support price system and corporatise farming. The meeting has been called at 3 pm on December 1 at Vigyan Bhawan in the national capital, Tomar said, adding that those leaders who were present in the meeting held on November 13 have been invited this time.
« Back to LIVE