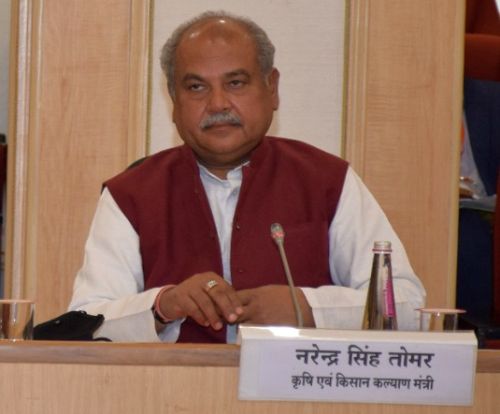 As a meeting with representatives of protesting farmers remained inconclusive, Union agriculture minister Narendra Singh Tomar said on Tuesday they have been asked to come with specific issues in the new farm laws and the government is ready to discuss and address their concerns.
The government had called a meeting with 35 representatives of agitating farmers at Vigyan Bhawan hereafter large-scale protests by various farmer groups, including from Punjab and Haryana, entered its sixth day on various borders of the national capital.
"We had a detailed discussion. We will again meet on December 3. We suggested to them to form a small committee, but they said they all will be present in the meeting. So, we agreed to that," Tomar told PTI after the meeting.
Asked why the government was holding a separate discussion with Bharatiya Kisan Union chief Rakesh Tikait, the minister said, "They have come to us, so we are discussing with them also. We are ready to discuss with all farmers."
Asked when the deadlock will end, he said, "The time will decide."
On the protesting farmers insisting on the repeal of all three farm laws, Tomar said, "We have asked them to come with specific issues in the laws and we are ready to discuss and address their concerns."
"If they have any specific issue with any clauses, let them point out. Let them put their views, we will look into them," he added.
Enacted in September, the laws have been presented by the government as major reforms in the agriculture sector by removing the middlemen and allowing farmers to sell anywhere in the country. However, the protesting farmers have been worried that the new laws will eliminate the safety cushion of a Minimum Support Price and scrap away mandis that ensure earning.
After the meeting, the All India Kisan Sangharsh Coordination Committee said in a statement that the talks remained inconclusive and the government's proposal was not acceptable to farm unions.
It further said protests will now intensify across the country until their demands are met.
The 35 farm leaders had met a ministerial delegation that included Agriculture Minister Tomar, Commerce Minister Piyush Goyal and Minister of State for Commerce Som Parkash, to press for their demands around the repeal of three central farm acts and withdrawal of the Electricity Amendment Bill 2020.
While 32 of the farm leaders were from Punjab unions and one from Haryana, two were from national farmer alliances - AIKSCC and RKMS.
The talks ended inconclusively and will resume the day after on December 3.
The farmer leaders rejected the government proposal to form a five-member committee to look into the objections and study the concerns. They told the government that such committees have led to no results and outcomes in the past.
The government also asked the farm unions for their detailed critique to be provided in the statutes, and to articulate the objections in detail. -- PTI
« Back to LIVE