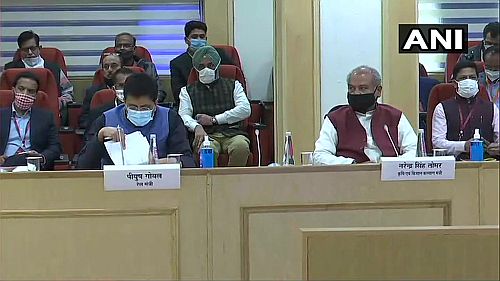 The leaders of the farmers groups that met with the government at Vigyan Bhavan today has turned down the government's suggestion for the formation of a committee to sort out the differences over farm laws.
Three ministers started talks with farmers' representatives as protests over the new farm laws intensified. More farmers from Punjab and khaps from Haryana are making their way to the national capital, demanding that the laws be repealed. Though the government is firm that the laws will not be withdrawn, sources said it will try to dispel concerns about the minimum support price and mandis. The farmers said the protests will continue if their demands are not accepted.
Agriculture minister Narendra Tomar, his cabinet colleague Piyush Goyal and junior industry minister Som Prakash are meeting the 35-member team of farmers.
« Back to LIVE