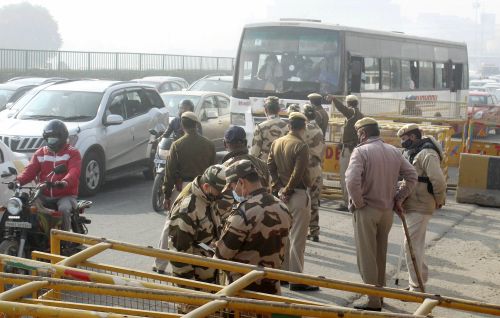 Serpentine queues of vehicles clogged many roads leading to Haryana and Uttar Pradesh on Tuesday as the Delhi Police kept the Singhu, Tikri and Chilla borders closed for traffic and heightened checking at other places in view of the ongoing farmers' protest.
The closure of borders has also resulted in heavy traffic on alternative routes.
With the Singhu bordering remaining closed, the traffic police advised people to take an alternate route.
"Traffic has been diverted from Mukarba Chowk and GTK road. Traffic is very very heavy. Please avoid the outer ring road from Signature Bridge to Rohini and vice versa, GTK road, NH 44 and Singhu border," the Delhi Traffic Police tweeted.
"Tikri border is closed for any traffic Movement. Badusarai and Jhatikara borders are open only for two wheeler traffic. Available open borders to Haryana are Jharoda, Dhansa, Daurala, Kapashera, Rajokri NH 8, Bijwasan/Bajghera, Palam Vihar and Dundahera," it said in another tweet.
The Badusarai border was open only for two-wheeler traffic.
Small border points such as Lampur and Auchandi also remained closed and traffic had to be diverted from Mukarba Chowk and GT-Karnal Road. The police also closed the Chilla border on Noida link road due to the farmers' protests near Gautam Budh Dwar.
Thousands of commuters remained stuck on the Noida Link road in Delhi as traffic moved bumper-to-bumper on the key route connecting the national capital and Uttar Pradesh on Tuesday evening.
At 7.30 pm, the beeline of vehicles stretched from Chilla border to Vikas Marg that leads towards ITO, a distance of around five kilometres, according to eye-witnesses.
"This is crazy! I have been stuck for more than an hour and have barely managed to reach from the Yamuna Bridge to the Akshardham flyover. The road is choked and I have been driving at snail's pace and now running out of patience, Vinay Singh, a Noida resident, told PTI over phone.
Animesh Kashyap, who lives in Noida, said he got stuck in traffic after crossing the Yamuna river was
"It's been over an hour and the situation still does not look any good. Apparently it's going to be a long haul because I hear that Chilla border is closed. I may park my car at a friend's place in Mayur Vihar and then look for some other option, like the Metro to go to Noida. But right now, reaching Mayur Vihar also seems impossible, Kashyap said.
Some commuters also lamented "lack" of any traffic police personnel on the road to help people through the situation and adequate prior advisory.
The Delhi Traffic Police and their Noida counterparts had earlier issued traffic advisories as the Noida Link road was closed for vehicular movement in view of protesting farmers descending at the Chilla border.
The Noida Traffic police suggested commuters from Noida going to Delhi to opt for the DND or Kalindi Kunj route. The Delhi Police asked motorists to use NH 24 or DND instead to reach Noida. -- PTI
« Back to LIVE