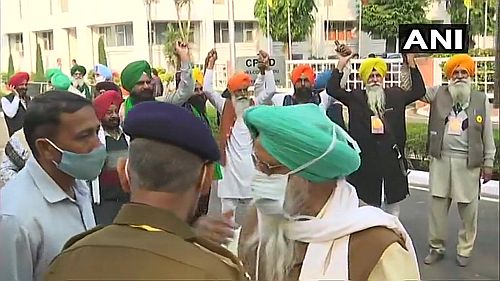 Leaders of the various farmers' groups reach Vigyan Bhawan in New Delhi where Union Agriculture Minister Narendra Singh Tomar has called them for talks.
Union ministers Rajnath Singh, Amit Shah, BJP chief J P Nadda and others held marathon discussions on the matter. The central government has called a meeting with all 32 agitating farmers unions at Vigyan Bhawan here at 3 pm. Rajnath Singh, Amit Shah along with Union Agriculture Minister Narendra Singh Tomar and Railways Minister Piyush Goyal held a meeting for over three hours over the farmers protest against the Centre's new agriculture reform laws.
Peaceful sit-ins by farmers, mostly from Punjab and Haryana, continue at the Singhu and Tikri borders with no untoward incident reported after Friday's violence, while the numbers of protestors swelled at the Ghazipur border on Monday.
« Back to LIVE

He also said that India hosting the G20 summit, which will be held next year, is not merely a diplomatic event but also a chance to showcase the country's capabilities before the world.

The Reserve Bank on Wednesday marginally lowered the country's GDP growth projection for the current fiscal at 6.8 per cent from its earlier estimate of 7 per cent. However, despite the downward revision in the economic growth...