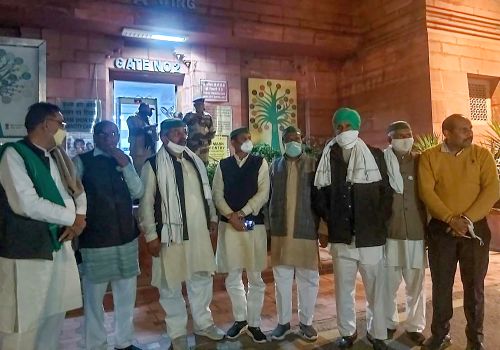 Farmer union leaders on Tuesday invited agriculture minister Narendra Singh Tomar to their protest site and offered to serve him 'jalebi' and 'pakoda' along with tea at their langar (community kitchen), after they were offered tea by the minister during a marathon meeting with the government over their ongoing agitation against three new farm laws.
"Tomar Saheb requested us to have tea during the break between the meeting, but we in return extended him an invitation to accompany us to our protest site where we are serving tea along with jalebi and pakodas in langar. This led to laughter all around," Jamhuri Kisan Sabha's Kulwant Singh Sandhu told PTI.
He said farmers' unions leaders wanted to utilise the break time to discuss the government's offer of forming committee.
At the meeting, the government suggested setting up a committee to look into issues raised by farmers protesting against new farm laws, but it was rejected by representatives of 35 agitating organisations during their marathon meeting with three union ministers that ended without any resolution.
The government has called for another round of discussions on Thursday, December 3. -- PTI
« Back to LIVE