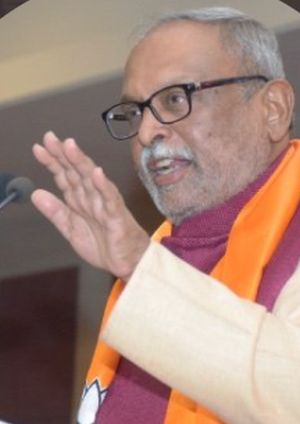 BJP MP from Gujarat Abhay Bharadwaj died on Tuesday while undergoing treatment for Covid-19 at a Chennai hospital, Deputy Chief Minister Nitin Patel said.
Bharadwaj (66) was a prominent lawyer and was elected to the Rajya Sabha in June this year. He tested coronavirus positive in August, after attending party meetings and a roadshow in Rajkot.
He was first admitted to the government-run Covid hospital in Rajkot and put on artificial lung support. A team of senior doctors later flew to Rajkot and on their suggestion, Bharadwaj was put on extraporeal membrane oxygenation therapy to improve his oxygen saturation levels, a doctor said.
Prime Minister Narendra Modi expressed grief over the demise of the MP from his home state.
"Rajya Sabha MP from Gujarat, Shri Abhay Bharadwaj Ji was a distinguished lawyer and remained at the forefront of serving society. It is sad we have lost a bright and insightful mind, passionate about national development. Condolences to his family and friends. Om Shanti," Modi tweeted.
Former Gujarat Congress chief Arjun Modhwadia also expressed anguish over the death of Bharadwaj.
"Condolences to grieving family of recently elected RS MP from Gujarat Shri Abhay Bharadwaj ji @BharadwajAbhay It is indeed unfortunate for people of Gujarat to have lost another voice and representation in the Rajya Sabha. May the departed soul find peace in Almighty's Heaven," he tweeted.
-- PTI
« Back to LIVE