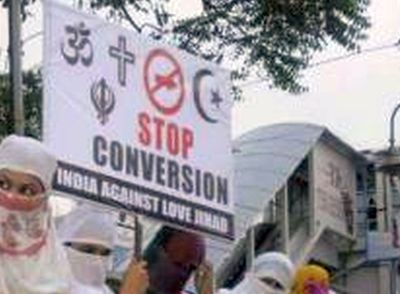 Two people have been booked under the new anti-conversion law in this district, police said on Tuesday.
Akshay tyagi, a resident of Pura village, alleged that Nadeem and Salman were forcing his wife to convert her religion and marry Nadeem, they said.
An FIR was registered against Nadeem and Salman under the Uttar Pradesh Prohibition of Unlawful Conversion of Religion Ordinance, 2020, and IPC sections 504 (intent to provoke breach of peace) and 506 (criminal intimidation) on Monday, SSP Abhishek Yadav said.
This is the first case under the anti-conversion law in the district.
The complainant, working as a contractor in a factory in Saharanpur district, said the accused had also threatened him with dire consequences if he went ahead with the complaint against them.
Tyagi said he came back to his native Pura village along with his wife to escape from the accused, but they continued to harass the couple.
Under the new anti-conversion law, a marriage will be declared "null and void" if the conversion of a woman is solely for that purpose, and those wishing to change their religion after marriage need to apply to the district magistrate.
The ordinance punishes religious conversion though misrepresentation, force, undue influence, coercion, allurement or by any fraudulent means.
The onus to prove that the conversion has not been done forcibly lies on the person accused of the act and the convert. -- PTI
« Back to LIVE