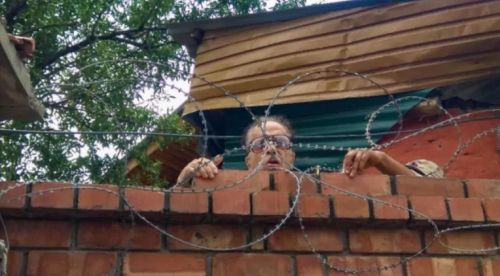 The BJP-led Centre is treating senior Congress leader from Jammu and Kashmir, Saifuddin Soz like a prisoner and is therefore crushing democracy, said the party's general secretary Priyanka Gandhi Vadra on Thursday. Vadra said Soz has played a crucial role in strengthening the Indian democracy and the Centre was practising "tyranny" in the Union Territory.
"Saifuddin Soj Sahab has played a big role in strengthening the Indian democracy. By treating him like a prisoner, the BJP government is crushing democracy. For the past one year there is tyranny in J-K. I want to remind the government that India is democractic republic," Vadra's tweet, which has also had a picture of Soz standing inside the boundary of his house with barbed wire fences on them, read.
Soz, earlier this week, was quoted in media reports claiming that he continued to be under house detention and that the main gate of his residence has now been locked from inside as well.
The former Union minister had urged the judiciary to take notice of the situation.
Earlier today, a day after the one year anniversary of the abrogation of Article 370, which took away from Jammu and Kashmir its special status and the bifurcation of the state into two Union territories, senior Congress leader P Chidambaram slammed the Centre for the 'brazen denial of human rights" and added that it is chipping away at India's "proud record as a free and democratic country" in the world. -- PTI
Image: Congress leader Saifuddin Soz trying to talk to media from above his compound. Pic: PTI
« Back to LIVE