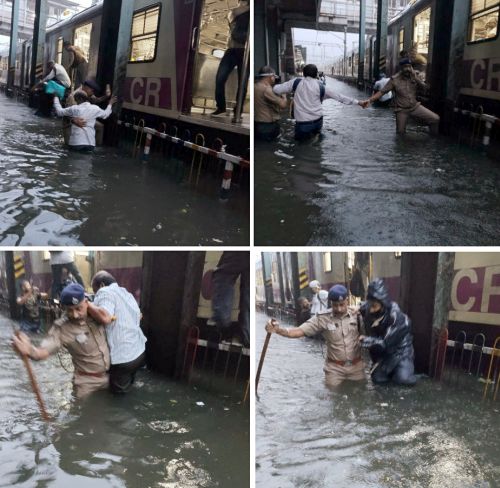 A day after heavy showers pounded Mumbai and neighbouring areas, the rain intensity reduced on Thursday morning and water receded in some flooded areas, leading to gradual resumption of rain and road transport services, officials said. However, some areas in south Mumbai, which witnessed a record rain on Wednesday, were still water-logged, they said.
The India Meteorological Department (IMD) has predicted moderate to heavy rainfall in the city and suburbs and intense showers in some parts of the Mumbai Metropolitan Region in next 24 hours.
The Colaba observatory in south Mumbai recorded 330 mm rainfall in the 24-hour period ending at 5.30 am on Thursday while the Santacruz weather station in western suburbs recorded 146 mm during the period, IMD Mumbai centre's deputy director general K S Hosalikar said.
Image: RPF Sandip Khiritkar rescues passengers trapped in a local train following heavy rainfall, near Masjid Station, yesterday. Pic: ANI
« Back to LIVE