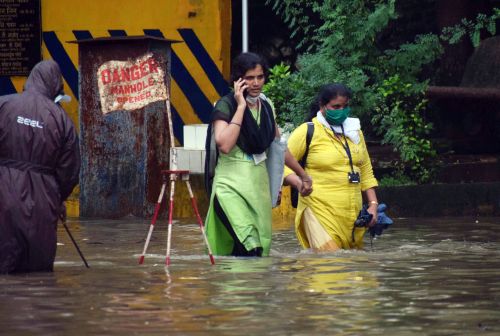 Maharashtra Chief Minister Uddhav Thackeray on Thursday took stock of the state administration's preparedness in the wake of the incessant heavy rains in Mumbai and other parts of the state, including Kolhapur where the Panchganga river was flowing close to the danger mark.
A statement issued by the Chief Minister's Office (CMO) said Thackeray asked the authorities to remain alert and ensure citizens do not face hardships. He spoke to the authoritiesconcerned and officials of the India Meteorological Department (IMD), it said.
Mumbai city received 331.08 mm rainfall while the suburbs received 162.3 mm downpour from Wednesday till 8.30 am on Thursday. The city witnessed strong winds at a speed of 106 km per hour while elsewhere it was 70 to 80 kmph, it said.
The chief minister asked the officials concerned to take up clearing of the uprooted trees on a war-footing.
He also praised the railway police and the National Disaster Response Force (NDRF) personnel for their efforts in rescuing 290 passengers from two local trains stranded on flooded tracks near Masjid Bunder in south Mumbai on Wednesday.
The statement said a railway employee was killed due to electrocution from a motor pump in Masjib Bunder while one person was injured when a tree fell on him in Kurla. Water-logging in different parts of the city was cleared fast by the civic staff, it said. There were 361 incidents of uprooting of trees and branches and 15 incidents of wall collapse in Mumbai, it said.
« Back to LIVE