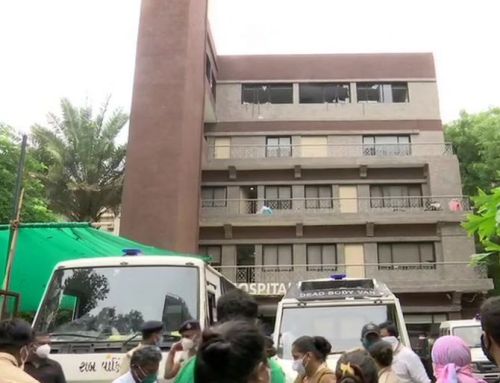 As many as 41 patients admitted at the Shrey Hospital have been shifted to Ahmedabad's Sardar Vallabhbhai Patel Hospital, said Rajiv Kumar Gupta, Additional Chief Secretary, Gujarat Government, on Thursday. Eight people have been killed in the incident.
PM Narendra Modi has announced ex-gratia of Rs 2 lakh each from Prime Minister's National Relief Fund to the next of kin of the deceased. Rs 50,000 to be given to those injured due to the fire.
Rajiv Kumar Gupta further informed that the Shrey Hospital has been sealed, and the bodies of the eight victims have been sent for post-mortem.
"Shrey Hospital has been sealed now. 41 patients shifted to Sardar Vallabhbhai Patel Hospital. Bodies sent for post-mortem," informed Gupta.
"We can't speak about the equipment or fire safety. This incident has happened just a while back; we will need time to collect all that data. Rest of the patients are safe. The report will be submitted within three days," he said.
"8 people have died in the fire incident. Other patients have been shifted to a safer place. We are taking the help of fire and forensic experts in the investigation. A trustee of the hospital is being interrogated. A thorough investigation will be conducted," said Rajendra Asari, JCP, Sector 1, Ahmedabad.Earlier, Gujarat CMO said that Sangeeta Singh Additional Chief Secretary of the Home department, Gujarat, will be leading the probe."
CM Vijay Rupani has ordered a probe in the incident of fire at Shrey Hospital in Ahmedabad. Sangeeta Singh, Additional Chief Secretary (Home Department) will be leading the probe.
The CM has ordered for a report within 3 days," said the CMO.On Thursday morning, a fire broke out at the Shrey Hospital of Ahmedabad reportedly due to a short circuit in the ICU on the fourth floor of the hospital. -- PTI
« Back to LIVE