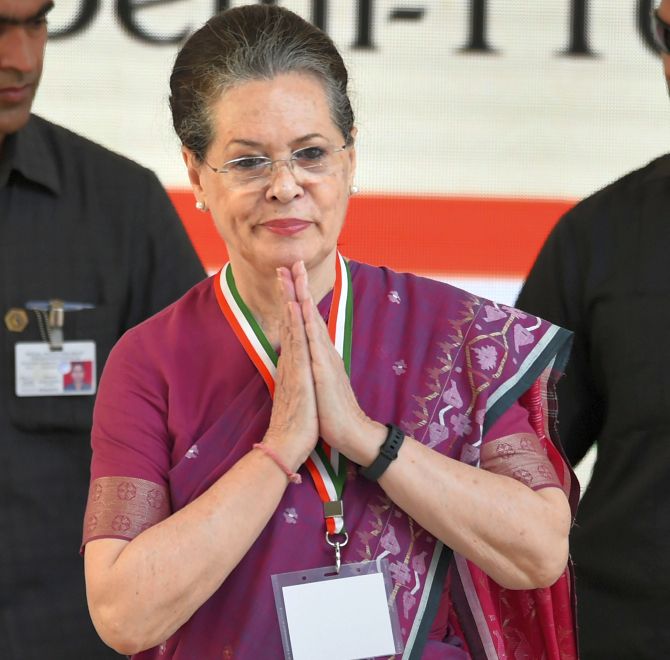 Congress interim president Sonia Gandhi will chair a meeting of senior party leaders in New Delhi on Thursday.
Congress general secretaries, in-charges of the states, Congress Legislative Party leaders and Pradesh Congress Committee presidents of all the states have been called for meeting at the party headquarters in the national capital.
It will be a first meeting which will be chaired by Sonia Gandhi after she took over as interim president of Congress.
Top sources of the Congress told ANI that the meeting has been called to discuss and finalise the preparations of 150th birth anniversary of Mahatma Gandhi.
Membership and Training Programme is also an agenda of this crucial meeting.
The Congress is focusing on a membership drive and to make it successful each state unit has been given targets.
A training programme will also be discussed in which the party has decided to appoint 'preraks' or 'motivators' at the district level across the country to scale-up its mass contact programme.
Congress state units have been asked to identify leaders from the party who will be given training for several days.
These preraks will work on the party agenda and look after party work similarly like pracharaks in the Rashtriya Swayamsevak Sangh.
This is a first of its kind of appointment within the Congress cadre.
The party now wants to emphasise on the training program of the party cadre to counter government agenda and also to take on the policy of the party to the grass-root level following a series of electoral setbacks.
According to the source, the grand-old-party is likely to discuss economic slowdown in the country in the presence of former prime minister Manmohan Singh, Priyanka Gandhi Vadra along with almost 90 top leaders of the party.
The party will discuss a strategy to target the government over the economy and employment situation.
Congress General Secretary Organisation has called a meeting of All India Congress Committee secretaries on Friday evening to discuss it. -- ANI
« Back to LIVE