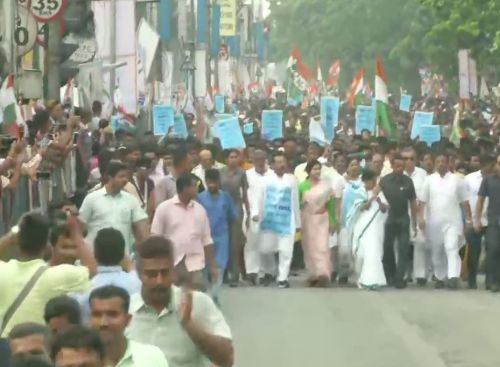 West Bengal Chief Minister Mamata Banerjee on Thursday took out a rally in north Kolkata to protest against NRC in Assam. The TMC supremo along with her party colleagues began her march from Sinthee More in the northern fringes of the city around 3 pm. The rally will culminate at Shyambazar five-point crossing, 5 km away.
The Trinamool Congress leadership, which has been one of the vociferous critics of the NRC, has accused the BJP of trying to divide people through the exercise. The party had on September 7 and 8 taken out rallies in other parts of the state to oppose the exercise to update citizenship register. Over 19 lakh of the 3.29 crore applicants in Assam did not find a place in the final National Register of Citizens, which was published on August 31. -- PTI
« Back to LIVE