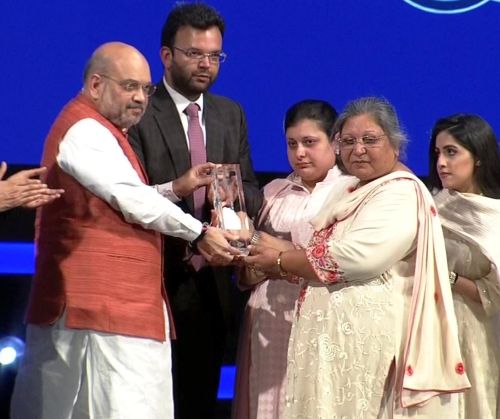 The Delhi and District Cricket Association on Thursday renamed the Feroz Shah Kotla as Arun Jaitley stadium in memory of the late politician-cum-sports-administrator.
In a glittering function, home minister Amit Shah digitally inaugurated the renamed Arun Jaitley Cricket Stadium in presence of late finance minister's family.
The DDCA also unveiled a new pavilion stand at the Feroz Shah Kotla after skipper Virat Kohli, who recently became the most successful India captain in Test cricket, surpassing MS Dhoni.
A short video and an animation film on Kohli's journey from being an U-19 player to India captain was also shown.
"When I decided to name a stand in honour of Virat Kohli, I told this first to Arun Jaitleyji. He told me this is a good decision because there is no better player than Virat in world cricket," said DDCA president Rajat Sharma.
Interestingly, the unveiling ceremony was held at the Weightlifting Hall of the Jawaharlal Nehru Stadium.
Besides the family members of Jaitley, the gala evening was also attended by sport minister Kiren Rijiju, former sports minister Rajyavardhan Singh Rathore, Delhi BJP chief Manoj Tiwari, ex-skipper Kapil Dev and former India opener Chetan Chauhan, among others.
"For Arun ji, cricket was his passion and life. He remained DDCA chief for 13 years and he played a great role in making the likes of Virat, Pant, Dhawan, Nehra, Sehwag as great players. All these players love him very much," Sharma said.
India's 1983 World Cup winning captain Kapil said: "Wonderful to have a stand in name of Virat. And whatever DDCA does for Arun Jaitley is not enough given his contribution."
Cricketer-turned-politician Chetan Chauhan also paid rich tribute to Jaitley.
"Arun Jaitleyji was president for 14 years and I was vice president. He was our friend, guide. Whenever we needed direction, we would help us. The biggest help he did was to rebuilt the Kotla stadium. So befitting to name it in his honour," Chauhan said. -- PTI
« Back to LIVE