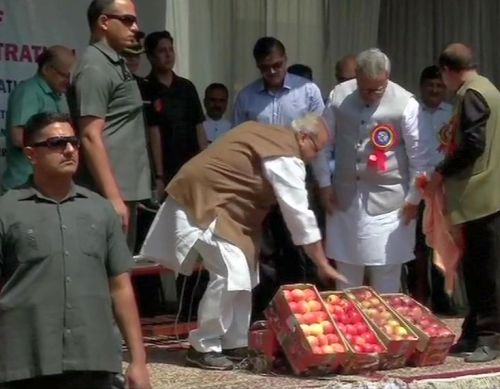 Jammu and Kashmir governor Satya Pal Malik on Thursday launched a market intervention scheme with an aim to provide optimum price to apple growers.
The scheme has been approved by the department of agriculture and cooperation, ministry of agriculture, under the aegis of ministry of home affairs for the current apple harvesting season, an official spokesman said.
It will be implemented by the directorate of planning and marketing, supported by the directorate of horticulture (Kashmir) and Jammu and Kashmir horticultural produce, marketing and processing corporation ltd, he said.
With a turnover of Rs 8,000 crore per year and close to seven lakh families directly and indirectly associated with it, the horticulture sector needs focused attention on providing every possible support to the growers, right from their orchards to the market, Malik said.
With the launch of the scheme, many issues relating to grading of apples, procurement, storage and marketing will be taken care of by the government, he noted.
He said the apple produce will be procured and marketed by the National Agricultural Cooperative Marketing Federation of India Ltd, and apple growers will get more remuneration for various grades of apple.
He also expressed hope that the scheme will help the growers to save their crop from distress sale.
He stressed on the need for farming community to become aware of their rights and strengthen themselves so as not to get exploited by market forces, causing farmers to suffer losses.
Malik expressed gratitude to Union home minister Amit Shah for launching the initiative to help apple growers and sought stakeholders' cooperation in making the scheme a success.
Farooq Khan, advisor to governor, described the launch of the scheme as a momentous occasion for apple growers which will assure them of minimum support price. -- PTI
« Back to LIVE