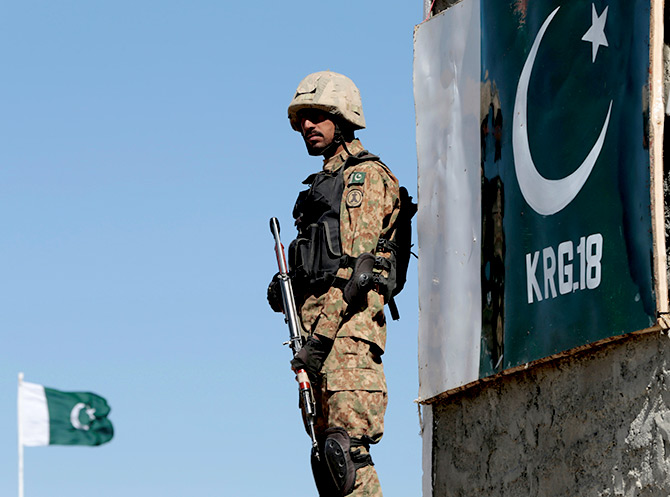 Pakistan President Arif Alvi on Thursday said India's action in Kashmir is a threat to peace in the region as New Delhi has violated its Constitution as well as the Simla Agreement by revoking Jammu and Kashmir's special status.
Addressing the joint session of parliament at the start of the new parliamentary year amidst protest by Opposition parties, President Alvi vowed to continue Pakistan's support for the people of Kashmir.
"Pakistan is with its Kashmiri brethren. We will continue to extend moral support. We were, we are and will always be with the Kashmiris," he said.
He said that India's actions was a threat to peace in the region but Pakistan always responded to India's "warmongering" with offers of dialogue.
"India has violated its own Constitution as well as the Simla Agreement with its illegal actions in Kashmir," he said.
Talking about the "successes" of the Imran Khan government, the President mentioned about the proposed opening of the Kartarpur corridor which will connect Darbar Sahib in Pakistan's Kartarpur with Dera Baba Nanak shrine in Gurdaspur district and facilitate visa-free movement of Indian Sikh pilgrims.
"Kartarpur initiative is praiseworthy step by Pakistan which will help to increase religious tourism in the country," he said.
Talking about the government's foreign policy, he said Pakistan wants to have good relations with all neighbours.
He said Pakistan wants peaceful relation with Afghanistan and trying for peaceful resolution of the conflict.
Prime Minister Imran Khan, the services chiefs and chairman of the Joint Chiefs of Staff Committee attended the session.
However, the address was marred by continuous protest by the opposition parties against the policies of the government to refuse to allow the jailed opposition parliamentarians to attend the session.
Meanwhile, Foreign Office spokesman Mohammad Faisal criticised Prime Minister Narendra Modi's remarks about terrorism during a public gathering in Mathura, saying India is tarnishing Islamabad's image by levelling allegations of terrorism.
On Wednesday, Prime Minister Modi in an apparent reference to Pakistan said that the roots of terrorism are being nourished in India's neighbourhood. -- PTI
« Back to LIVE