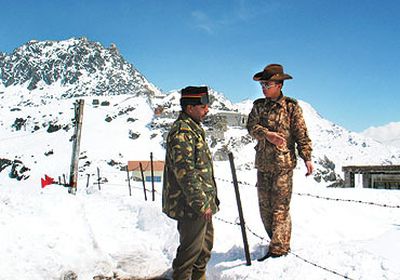 Ahead of a massive military exercise planned along the China border by India, soldiers of Indian and Chinese Army were engaged in a face-off near the northern bank of Pangong Tso Lake in Ladakh but disengaged after talks between the two sides there.
Both the sides stake claim over the more than 130 km which extends between both India and Chinese controlled Tibet area.
'There was a face-off between the two armies but it got over after the delegation-level talks between two sides,' Indian Army said in a statement.
'The face-off is over now and it had de-escalated and disengaged fully after delegation-level talks yesterday,' Indian Army said.
The force also stated that such incidents happen due to differing perceptions of the LAC and there are established mechanisms to resolve such differences.
Incidentally, the confrontation took place in the same area where Indian and Chinese troops had engaged in a bitter scuffle during the Doklam standoff.
This comes days after the Indian Army denied reports of incursion by the Chinese into Arunachal Pradesh.
India is fast building infrastructure along the borders with China which had modernised its side of the disputed Line of Actual Control a long time ago.
Indian Army is going to organise the war-games code-named HimVijay in Arunachal Pradesh starting October in which the Air Force and the Army will jointly exercise real war scenario inside Indian territory simulating it to be a battle on the eastern front. -- ANI
« Back to LIVE