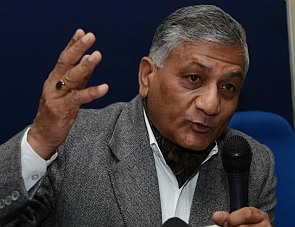 Union minister General V K Singh (retd) said in Gwalior on Thursday that the Union government has a "special strategy" for Pakistan Occupied Kashmir (PoK).
However, such things are not discussed in public, Gen Singh told reporters.
He was replying to a question about Army Chief Bipin Rawat's statement that the forces were always ready for action in the PoK but the decision is for the government to take.
"Such things are not spoken about in public. There is a special strategy (`ran-niti') for this. It will be acted upon (`us par karya hoga')," Singh, a former Army chief, said. -- PTI
« Back to LIVE