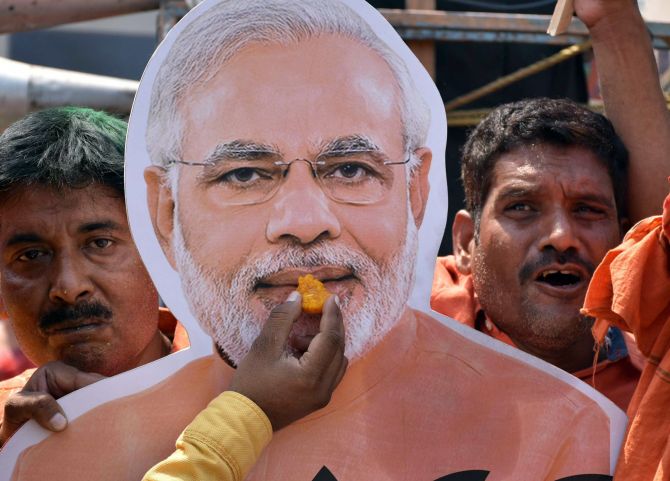 Bharatiya Janata Party chief Amit Shah and working president J P Nadda will distribute fruits among patients at AIIMS in New Delhi on September 14, as part of a Seva Saptah (service week) the party will observe to mark Prime Minister Narendra Modi's birthday.
The BJP will observe 'Seva Saptah' from September 14 across the country during which various welfare activities will be carried out, party general secretary Arun Singh said.
Addressing a press conference at the party office in New Delhi, he said the service week will be celebrated by the party's all MPs and MLAs in their respective constituencies.
As part of it, blood donation camps, free health checkup camps, distribution of food items among orphans and elderly people will be organised, Singh said.
The Seva Saptah celebrations will begin with Shah and Nadda visiting AIIMS in the national capital and distributing fruits among patients, Singh said.
During this week-long drive, the focus will be on three things -- cleanliness, shunning single-use plastic items and water conservation, he said, adding that the aim is to carry out a countrywide campaign to serve the people.
Exhibitions will be also be organised based on the life of Prime Minister Modi and the welfare schemes started by his government, he said.
Last year too, the party had celebrated Modi's birthday, which falls on September 17, as Seva Saptah. -- PTI
« Back to LIVE