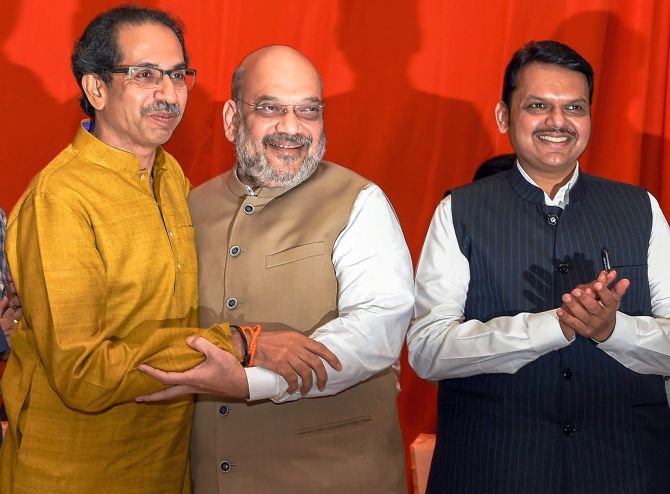 The BJP has offered 106 seats to its main alliance partner Shiv Sena for next month's Maharashtra Assembly polls, but the latter is not likely to accept less than 120 seats, a source said on Thursday.
The seat-sharing talks between the two parties are likely to conclude in a day or two, a BJP source said here. The Assembly has a total of 288 seats. Last time the two parties had fought the elections separately.
"We have offered the Sena 106 seats. But the Sena may agree to 120 (and not less)," the source said.
The Jan Surajya Shakti Party, another ally, has agreed to contest four seats, he said. The party, which has a presence in western Maharashtra had demanded nine seats to start with, but its leader Vinay Kore agreed to four seats during the talks on Wednesday, the source said.
Discussions are still on with the remaining allies, namely, Republican Party of India led by Union minister Ramdas Athawale, ShivSangram and Rashtriya Samaj Party, sources said. The three parties had rejected the BJP's proposal that their candidates contest with the BJP symbol.  -- PTI
« Back to LIVE