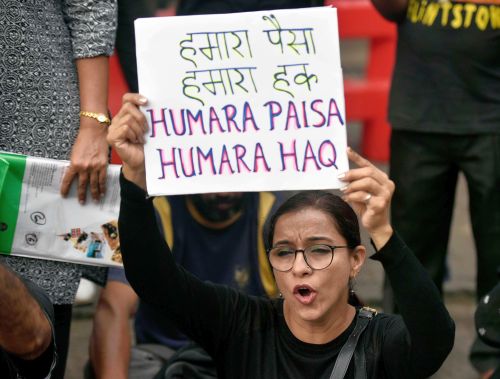 Customers of crisis-hit PMC Bank took to Mumbai's streets once again to protest against the alleged inaction by the Reserve Bank of India in the latest banking fraud to rock the country.
The protesters, armed with signs such as 'No Bail, Only Jail', accused the RBI of not taking sufficient action against the PMC Bank officials. Recounting stories of how their hard-earned money was stuck after limits were imposed on withdrawal, the customers demanded that the bank return their savings.
After registering a money laundering case against HDIL chairman Rakesh Wadhawan and his son Sarang Wadhawan in the ₹4,355 crore Punjab Maharashtra Cooperative Bank fraud case, the Enforcement Directorate on Monday searched the properties of Wadhawan's close associates.
It was found during the searches that the owners of Housing Development and Infrastructure Ltd gifted a number of houses to politicians in some of Maharashtra's posh locations. The ED remained tight-lipped about the identities of these politicians.
« Back to LIVE

The development is taking place even as the Indian and Chinese side have been talking to each other at the battalion and brigade level at all the locations in the Eastern Ladakh area which have not yielded any results so far as the...