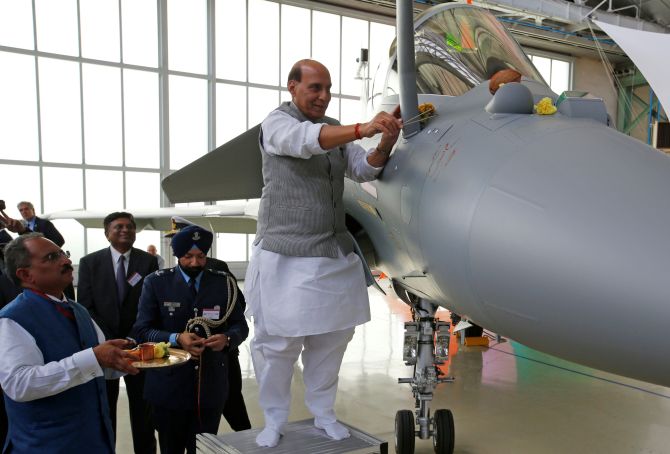 Dubbing the entire episode of Union defence minister Rajnath Singh accepting Rafale fighter aircraft in France a "tamasha" (drama), senior Congress leader Mallikarjun Kharge on Wednesday said that his party did not show off when they bought weapons-like the Bofors gun.
His comments came a day after the defence minister performed shastra puja (worship of weapons) on the auspicious occasion of Dussehra after receiving the first of the 36 Rafale jets in the French port city of Bordeaux.
Following this, he emblazoned the aircraft with an 'Om' and laid flowers, coconut and lemons to ward off the evil eye.
"There is no need to do such 'tamasha' (drama). When we bought weapons-like the Bofors gun previously purchased, no one went and brought them while showing off," he told ANI.
Taking about the capability of the fighter jets, Kharge said that the Indian Air Force officers will judge whether they are good or not.
"These people go, show off, sit inside (the aircraft)," he said, referring to the sortie Rajnath took in the aircraft after performing the rituals.
The first of the 36 French-built Rafale fighter jet bearing the tail number RB-001 was formally handed over to India on Tuesday.
The ceremony coincided with the foundation ceremony of the IAF. -- ANI
« Back to LIVE