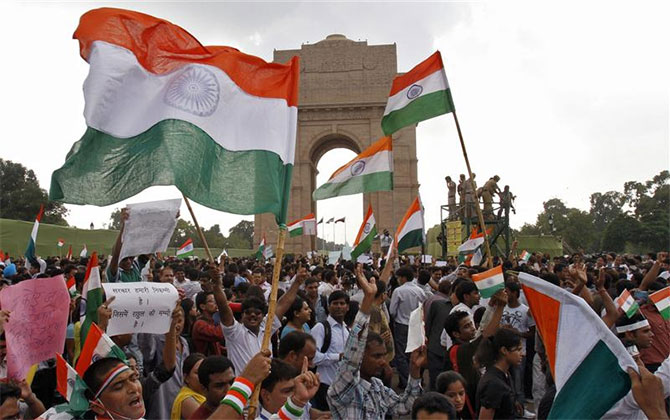 India has moved down 10 places to rank 68th on an annual global competitiveness index, largely due to improvements witnessed by several other economies, while Singapore has replaced the US as the world's most competitive economy.
India, which was ranked 58th in the annual Global Competitiveness Index compiled by Geneva-based World Economic Forum, is among the worst-performing BRICS nations along with Brazil (ranked even lower than India at 71st this year).
Announcing its latest index, the WEF said on Wednesday India ranks high in terms of macroeconomic stability and market size, while its financial sector is relatively deep and stable despite the high delinquency rate, which contributes to weakening the soundness of its banking system.
India is ranked also high at 15th place in terms of corporate governance, while it is ranked second globally for shareholder governance, the WEF study showed. In terms of the market size, India is ranked third, while it has got the same rank for renewable energy regulation.
Besides, India also punches above its development status when it comes to innovation, which is well ahead of most emerging economies and on par with several advanced economies, the report said.
But, these positive metrics contrast with major shortcomings in some of the basic enablers of competitiveness in case of India, the WEF said, while flagging limited information, communications and technology adoption, poor health conditions and low healthy life expectancy.
The WEF said the healthy life expectancy, where India has been ranked 109th out of total the 141 countries surveyed for the index, is one of the shortest outside Africa and significantly below the South Asian average.
-- PTI
« Back to LIVE

The development is taking place even as the Indian and Chinese side have been talking to each other at the battalion and brigade level at all the locations in the Eastern Ladakh area which have not yielded any results so far as the...